Insects that inspire: the magic of fireflies

This article was originally published in July 2018.

There is something magical about fireflies. Do you remember chasing and catching them in your childhood? Did you collect them? I remember collecting them in mason jars that my grandmother used for peach and fig preserves. How many could we catch? Would there be enough to serve as a make-shift nightlight? Would it be okay if I kept them just until morning, please? As I grew up, my days catching fireflies dwindled, but I still loved seeing them light up the backyard in summer. 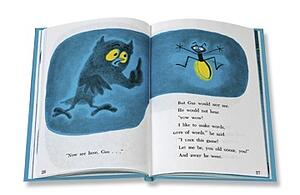 Fast forward 20 years to the birth of our first child. A dear family friend gave us a copy of P.D. Eastman's Sam and the Firefly. (You may also remember the classic Are You My Mother? from the same author.) In this Dr. Seuss beginner book, readers meet Sam the owl and Gus the firefly. This dynamic duo soar through the air together, writing words in the night sky. What begins as fun, turns to mischief and confusion for people on the ground reading their words. Wise owl Sam helps Gus to "write" his wrongs, and a wonderful friendship remains. I absolutely loved this book and read it to my own Sam so many times that we even considered naming our second child Gus. (Our daughter, Parks, is happy that we did not.)

CBS This Morning recently aired a segment about fireflies. In a forest near Elkmont, Tennessee, conditions are just right for the photinus carolinus, the official species name of the rover firefly. Thousands upon thousands of them gather and put on a light show like nothing you've ever seen. It's so spectacular, that tourists camp out every year for a front row seat at one of nature's most amazing light shows.

P. Carolinus is actually a member of the beetle family. They take from one to two years to mature from larvae, but will live as adults for only about 21 days. While in the larval stage, they feed on snails and smaller insects. Once they transform into their adult form, they do not eat. The synchronous light show they produce is their mating call. The male typically signals with four to eight very bright flashes over a few seconds, followed by a dark period when the female, much less bright, responds. These insects are more efficient than a light bulb, emitting no heat, but rather a flash of pure light.

Whether you are a casual observer, a Tennessee tourist or a professional photographer like Radim Schreiber, most agree there is something special about the summer light of the firefly.

Not all insects in your backyard are as desirable as fireflies. Download the outdoor dining guide. And if you need pest control for other insects (think wasps, mosquitoes, fire ants) let Cingo help you find an affordable plan.