Shelter Will Be Security For Homeless Female Veterans

Margaret Queen-Flowers was 12 years old when her grandmother took her along as she set up a stand at a Farmer's Market in Washington, D.C.

"I saw people sitting on the curb, and I asked my grandmother who they were," says Margaret.

"She told me they were homeless, and we made cheese sandwiches for them. They were hungry, my grandmother said, and we had enough to share."

"That experience instilled in me a purpose for life."

Decades later Margaret still cares for the homeless in Warner Robins as the Executive Director and Founder of the Genesis Joy House Homeless Shelter. Two factors drive her -- an abiding faith in God and an enduring concern for homeless female veterans.

"A woman who has served her country shouldn't have to be homeless or lose her children when she returns," says Margaret, whose son, husband, and late father-in-law were all veterans. 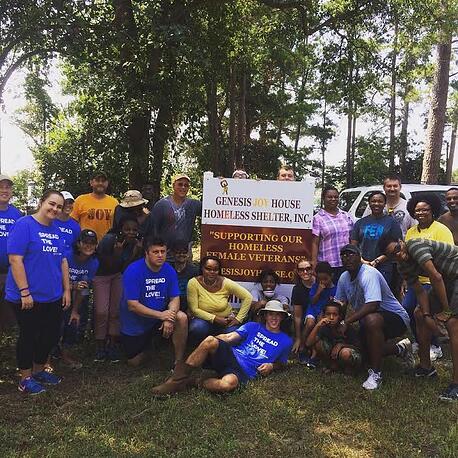 "There are facilities for homeless male veterans, but not for female veterans in our area. It feels like they've been forgotten."

Margaret and her husband, Edward Flowers, III, formed a nonprofit to advocate on behalf of homeless female veterans. In search of a property to use for to provide temporary housing, they found just what they prayed for: A site with three buildings on one parcel — a duplex home, a fellowship hall building, and a five-unit studio apartment building. The property was donated to them by a businessman, and will be able to house up to 14 homeless female veterans at a time. They are currently renovating the property for use beginning in September.

The work of Genesis Joy House is supported by those stationed at Robins Air Force Base, the city's mayor and many local church groups.

Finding the homeless female veterans turned out to be a tougher-than-expected challenge. "I have to go into the woods and seek them out," she says.

Margaret sees homeless women living on raggedy couches when weather permits, and scattered throughout the community when it doesn't. As she works on her own shelter, she's helping women find space at other shelters.

"We keep track of those we help," Margaret says. "We've helped about 25 women find jobs and their own homes. And soon we'll be able to do even more."

Cingo means to surround and secure — to protect. That's what we do. And we have a lot of respect for those who take it upon themselves to make protection a part of what they do, too. That's why we've launched Circle & Shield, our award to a member of the community who helps make the world a better place, a safer place.

Click here to nominate someone for Cingo's Circle & Shield. We'll do the rest.

Cingo provides home protection services throughout Georgia and South Carolina, including Atlanta, Augusta, Charleston, Douglas, Dublin, Milledgeville, Savannah, Vidalia, Waycross and all points in between. Cingo was named a Best Place to Work in Georgia by Georgia Trend Magazine and listed as a National Best & Brightest Company to Work For. Learn more at www.cingohome.com.