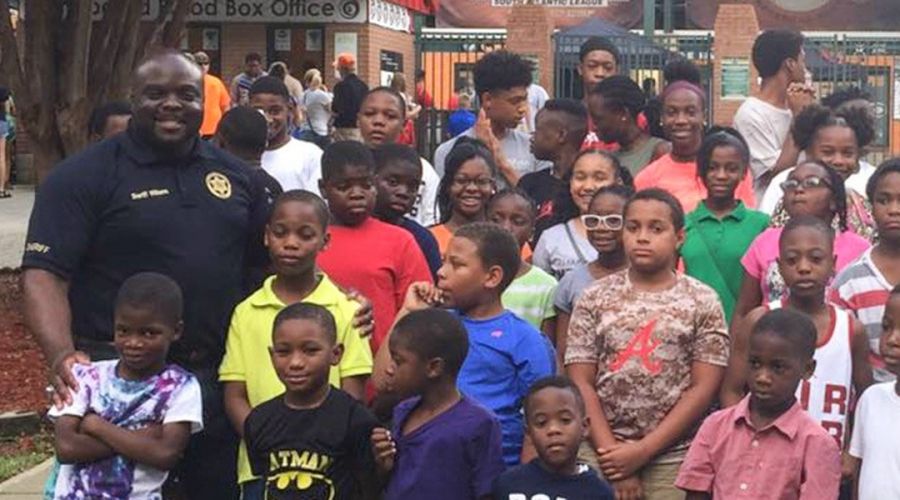 We appreciate the innovative work Sheriff Alfonzo Williams is doing to make his community a better place, a safer place. We are privileged to present him with Cingo’s Circle & Shield award.

Take the case of Christopher Grubisa, a 32-year-old resident of Burke County who survived a rare but severe bacterial infection that resulted in the amputation of both his arms and legs. Inspired by his story of resilience, Christopher’s hospital patient manager wanted to build a home for Christopher and his family. To make it happen, she knew just the person to turn to — Sheriff Williams.

Sheriff Williams and his team set up a GoFundMe page and held other fundraisers to raise $70,000 of their $270,000 goal for a home for the Grubisa family. Sheriff Williams says they won’t stop until they’ve raised enough money to build a home in Burke County for Christopher, his wife and their three children.

“We believe law enforcement should serve the community,” says Sheriff Williams, born and raised in Burke County, located in eastern Georgia south of Augusta. “We lead with social work, and we want to be known for serving others.”

From popsicles with the police to toy drives that ensure every child in the county has a toy at Christmas, Sheriff Williams and his team’s initiatives continue to help make Burke County safe and secure.

The results of Sheriff Williams’ leadership are impressive: Violent crime and property crime has gone down about 52 percent over the past 18 months.

Sheriff Williams and his team are especially focused on providing the children of his community with better opportunities.

With Camp Impact, youths are referred by the juvenile courts or brought in by their parents to learn about conflict resolution, choices and consequences. The program, started in 2017, has served 36 children. After participating in the program, youths show better behavior at home and improved social skills, Sheriff Williams says.

Another initiative is the Explorers Program for teenagers 14 to 18 years old who are interested in law enforcement. This program teaches kids about crime scene processing, search and seizure, and what it takes to be a police officer. Sheriff Williams views this successful program as not only an avenue for kids to be part of their community but to gain the knowledge to keep it safe.

“We see the positive impact we make on people’s lives and it keeps us inspired,” says Sheriff Williams, who has worked in law enforcement for 30 years. “We’re making a difference by preventing further victimization and giving kids an alternative to bad choices.”

Recently, the city of Waynesboro had a water main break that caused the city to go without clean water for a day and a half. Sheriff Williams used his established partnerships with local businesses to supply and hand out 30 to 40 thousand bottles of water. They didn’t wait for the city, they went to work immediately to serve their community.

“We hope that others will see Burke County Sheriff’s office as a service agency,” says Sheriff Williams. “We are here to serve and improve police community relations, which leads to better opportunities and safety for everyone.”

Cingo means to surround and secure — to protect. That’s what we do. And we have a lot of respect for those who take it upon themselves to make protection a part of what they do, too. That’s why we’ve launched Circle & Shield, our award to a member of the community who helps make the world a better place, a safer place.

Click here to nominate someone for Cingo’s Circle & Shield. We'll do the rest.